To commemorate the 71th Anniversary of the founding of the People’s Republic of China, a wreath was laid to the equestrian statute of The Liberator at the Bolívar Square in Caracas.

The event was headed by Executive Vice-president Delcy Rodríguez, in the company of China’s Ambassador Li Baorong, Minister of People’s Power for Tourism, Félix Plasencia, Vice-minister for Asia, the Middle East and Oceania, Rubén Darío Molina of Venezuela’s Foreign Ministry and counsellors of the Chinese Embassy.

Venezuela-China friendly ties embody a relation based on the principles of mutual respect, equality and reciprocal benefit.

Noteworthily, China-Venezuela relations have been strengthened through the endorsement of multiple cooperation agreements, the creation of special funds and the shipment of Chinese humanitarian aid and epidemiological experts to support the fight against COVID-19.

Therefore, today, more than ever, the Bolivarian Government celebrates this important day that opened a free pathway to humanity. 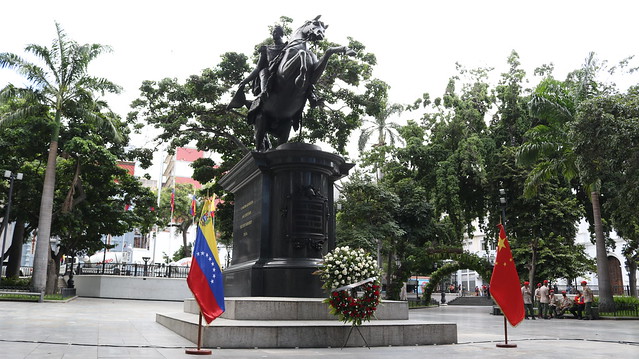